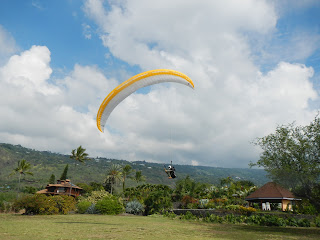 It's been a while since I have written a story......ok, I have never written one, but finally I got down to work and this Big Island Soaring Blog needs some new ink.

I was trying to get Thom 'Sidehill' to come to the Big Island Playground again.  It had been awhile since he been with the gang here.  It was tough until, I had a 4k flight one day with a trip north to land at Kona Waina Elementary School and then Scotty & Bill made it to Old A's ( old air port just past Kailua Kona proper).  These XC trips were all it took and the fact that the strong winds shut down Oahu for the next week or so. He booked his flight to Kona totally forgetting that he had the HPA annual meeting to attend.  I told him what is the worst that can happen, they will vote you out, only Alex has a life sentence.

I picked him up at the airport on Friday at 9 a.m. and we headed to Church.  We stopped by Azfelia's (probably miss spelled) which is a new LZ for him since the old Brown Spot now has  houses on it.   We walked it and I gave him a thorough briefing.

We were headed to the Church when the Gene, Sammy and Scotty past us.  Hey, wait for us.  Their car was full and Jean said he would come to pick us up at the bottom of the launch hill, so we headed up and parked at the bottom.  Thom got his gear ready as did I.   Gene was there in moments and appeared to be happy to see Thom, as you know Gene is a PG politician too.

We were greeted at the Club House by Smiling Sammy & Scotty Gee.  Small crew today just the five of us.  Scotty, Gene, Sammy, Thom & me.  Great flights were had by all but Thom scored only one, he stayed up for just under 2 hours and broke his Big Island record.  Highest and longest time for a flight.  We, 4 landed and road back up and prepared to re-launched while Thom was still up.  But by the time were launching he had was tired and had gotten low. He headed in to land at the new LZ.  Gene had headed home, so we were down to just 3.

Thom said you guys stay up and have a good 2nd flight.  I am going to take a nap or walk down to the Ice Cream store.  Apparently he talked himself into the ice cream and started walking, it's a long walk down from there especially with a stuff sack hitting you in the back of the legs.

While he was eating his ice cream he met Doug Stroup's dad.  Doug is an instructor in Washington state that runs alot of the Chelan Opens.  Then he got the call that we 3 had landed at Azfelia's but we needed a car.  We asked him to keep walking to the Church and grab Sammy's car.  I know that is not very hospitable to have a visiting pilot walk all the way down to get the car to come pick us up but it gets worse.

Saturday was another day and it looked a tad but better than Friday but you never know.  The crew was bigger this day with Neil, Charlie, Denise, Visitor Stan, Meila (not spelled right I am sure but she might understand) and most of Friday's crew of Sammy, Scotty, Thom and me. 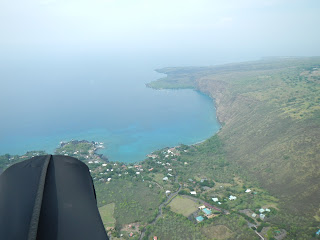 Everyone had great flights and as usual Neil ventured off north giving us updates on the conditions and his elevation.  Thom got the closest to Neil's 3600' by hitting yet a new personal record of 3200'.  Thom got to fly over the Pali, towards Choice Mart but turned out over the bay to land shortly after with Sammy at the Church.

I had the scratch session that was the hardest I have worked in quite sometime.  I flew for an hour and 20 minutes trying to get above the road and when I did I was beat.  When I finally had enough elevation, I took a 10 minute jaunt to join Sammy and Thom at the Church with Neil coming in shortly after.  We were tired and hungry, so Thom & I left to Annie's for some lunch.

So far Thom is 2 for 2 but he has an XC itch that he wants to get a trip to the Old A's.  Hopefully Sunday just may be brewing in his favor.

Flight of the Minnow (a 3 turnpoint tour) 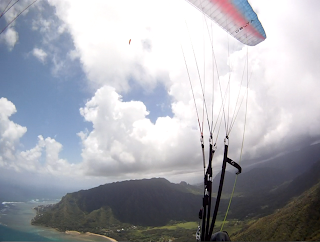 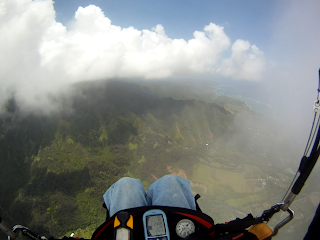 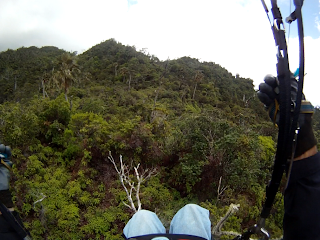 Saturday, June 2nd
We will be spraying gorse at Puuloa.
(See Saturday, November 5th, 2011 post for details.)
Posted by Neil at 12:34 PM No comments:

The Swiss are here! 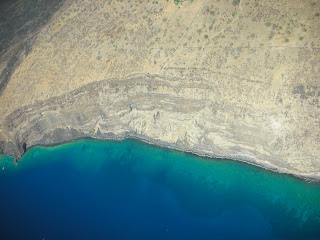 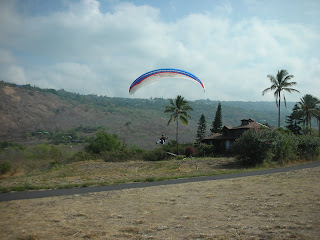 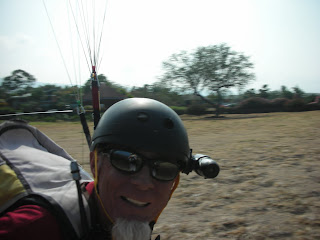 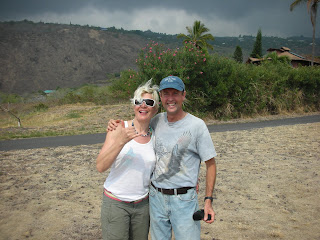 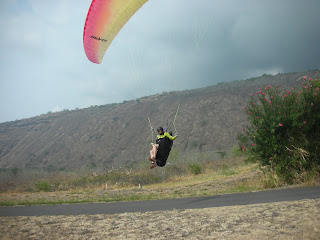 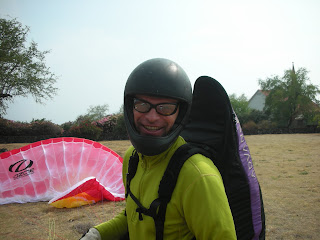 Always a pleasure to have visiting pilots with awesome skills! While I missed the comp pilots top landing at will on Friday, it sure was a pleasure to fly with Phillip and Monica on Saturday and Sunday. Hope to see you all in the air again soon! In the words of Phillip "keep on flying!"
Posted by Neil at 6:49 PM 1 comment:

Awesome day at the Bay 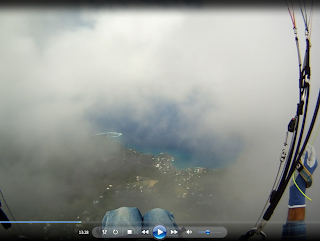 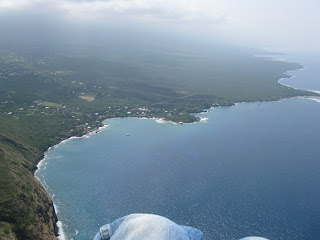 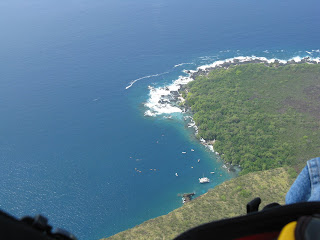 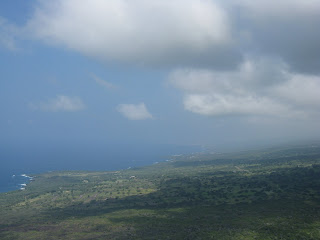 Wednesday 10/05 was another awesome day at K-bay. The 1st flight started at about 9:30 and everyone that launched got up. That would include Sam, Dennis, Charlie and Me; with Gene following over an hour and a half later. Greg, who gave us our 1st ride up to launch, unfortunately made the decission to skip flying today. The lift was moderate, but widespread. The Lava was pulsing; it was working over McCoy's, Kalamalani, the Bananas, behind the Brown, at the Church, and even over the bay side of the Pali. Almost every cloud I flew to took me up. Base was a little low, but I was smelling roasting coffee at 2800 ft. at one point, without being in the clouds. There was even a little rubbish fire at McCoy's to follow the smoke up from. Everyone had at least one good flight, and some 2, before it finally clouded over and started to sprinkle on the hill. Let's hope this is an indication of good things to come for the rest of the fall and winter.
Ramjet Out
Posted by flyinrog at 8:22 PM No comments: 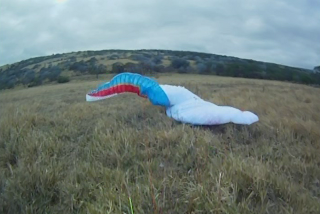 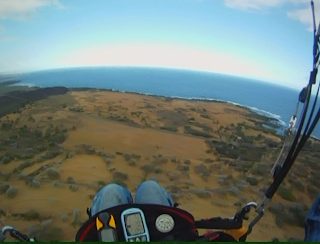 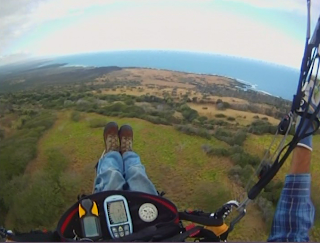 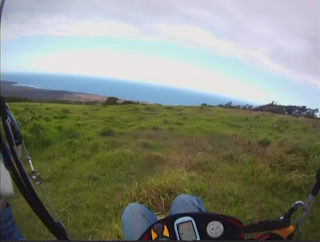 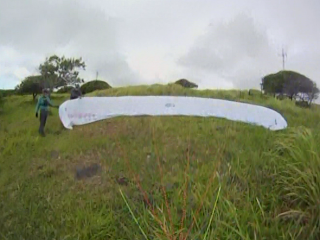 Well, here's the story I promised last month. After a lot of good ground work and scouting by Ted, (not to mention the sales pitch to Sam and me) Sam and I took a look at the launch above Whittington Beach park and it looked doable with survivable consequences for failure .It was about 5 pm, with a cloud layer from the hills in back, out over the water, and a fairly steady breeze blowing in at 8-10 mph on launch. No white-caps on the water. I took the first shot at it, and after some difficulty getting the Delta up cleanly, I got off on the very shallow slope. There was some turbulence early, but enough small pockets of lift to give me a little cushion above terra firma. Then I ran into the compression zone and seeing 0's to neg. numbers, got on the bar and pushed it back up to 8 or 9 mph. I was only using about 1/2 bar so had plenty left if it had gotten worse. That was enough to get me over the edge of the hill and into mellower air. Now I had the LZ in easy reach with over 800 ft. of altitude. And what an LZ it is. Huge, flat, open, with mostly short grass. Wish we could move it over to K-bay! After landing, Sam took off and had a rather uneventful flight as well (ignoring my advice on the radio, not to launch). Ted handled the retrieve and we all celebrated another Big Island site pioneered. I believe that there is certainly some caution needed in deciding when to fly this site, but there may also be some big rewards in the area of XC's and great views for someone getting the timing right.
Ramjet Out
Posted by flyinrog at 10:39 PM No comments: